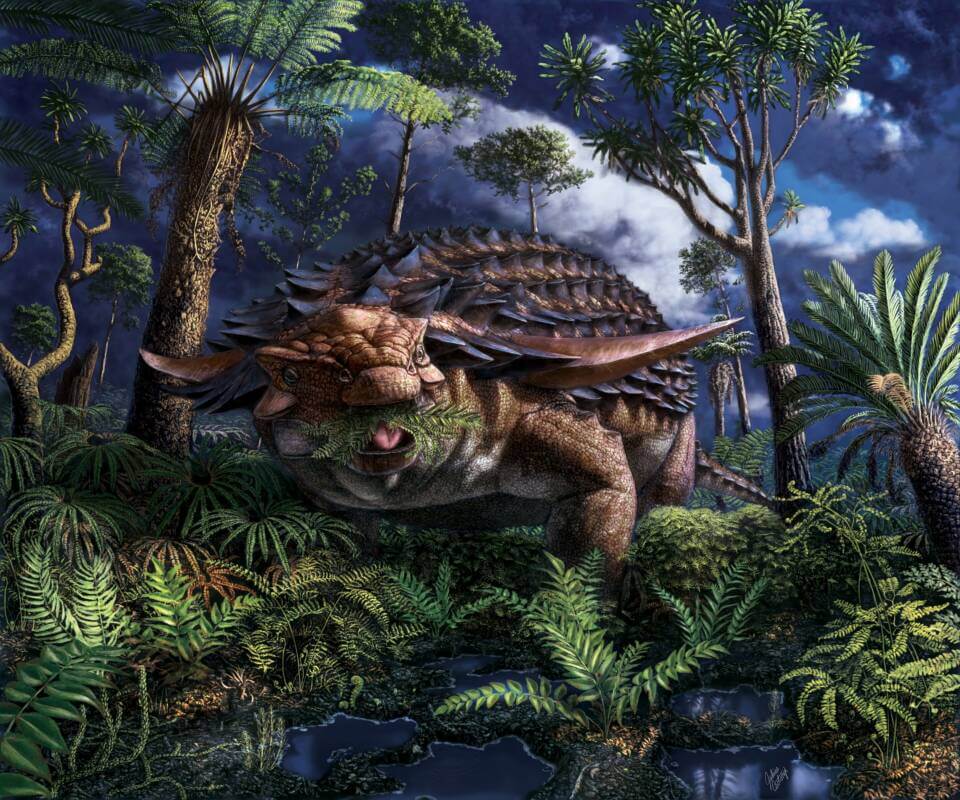 it looked like Borealopelta markmitchelli in the representation of the artist

In 2011, during work on one of the canadian mines, the scientists found the remains of a herbivorous dinosaur of the form Borealopelta markmitchelli. This finding is worthy of our attention because earlier researchers had not been able to unearth so well-preserved body of a dinosaur. The remains were accidentally crushed by the bucket but, despite all the damage and age more than 110 million years, they still look good. Inside dinosaur scientists have found the remains of the food eaten is a rarity in the study of ancient creatures. In the course of their study, the scientists were able to answer a number of interesting questions, including the exact diet of the herbivorous creatures of ancient times and the time of death.

According , herbivorous dinosaur Borealopelta markmitchelli is relatively new to science species. It was named in honor of Mark Mitchell, a fellow of the Royal Torrelavega paleontological Museum, which for five years had cleaned up the remains from dirt. The new dinosaur belongs to the family of nodosaria, which were quite clumsy creatures with armour on the back. Their body length was about six feet, and weight reached 2.5 tons.

Nodosauridae was protected by armor with spikes

As stored in the Museum of the dinosaur, the weight of his body was about 1.3 tons. Judging by the well preserved contents of the stomach the size of a soccer ball, about a hundred million years ago, armored creature walked around the area of the burned forest, ate a fern, and, for unknown reasons, died. The body of the ancient animal were in the sea and was covered with bottom sediments, which protected it from destruction for hundreds of millions of years.

According to geologist Jim Basinger (Jim Basinger), who studies the structure and evolution of our planet, extracted from the body of nodosaur stomach was the most well-preserved ever found. Previously, scientists have been able to find in the guts of dinosaurs the remains of eaten their plants, but to determine their view was impossible. In the case of nodosaurs such problem was not — scientists have studied plant materials and announced that a herbivorous creature mostly fed on ferns.

dinosaur Skull Borealopelta markmitchelli, which is stored in the Museum

In the dinosaur's stomach had traces of moss, and even flowers. But much love is being felt for about 88% of the volume of the stomach was filled with leaves and about 7% branches. Particularly strong dinosaur like ferns from a subclass of Polypodiidae, which includes many current plants. While armored fussy disliked conifers that millions of years ago grew in large numbers.

Ferns was a treat for many of the herbivorous dinosaurs

Another interesting finding inside dinosaur gastroliths. The so-called stones that are ingested herbivorous animals with underdeveloped teeth. If you keep parrots or other birds, you know that next to the feeder they should be a container of small pebbles. Getting into birds, they help them to grind food — teeth that they have. Most likely, the discovered representative nodosauridae had little teeth or they were absent. Here he had to eat stones.

According to biologist David Greenwood (David Greenwood), in the dinosaur's stomach were found traces of charcoal. Probably it got there together with food, that is an ancient creature ate on the spot, who recently walked the fire. This place attracted his attention for a reason, because baked the earth the first thing it grow ferns. Because fires are more likely to occur in the late spring and summer, scientists have suggested that the dinosaur died at this time.

But the cause of his death scientists have not said anything yet. Probably they do not know the answer. Option about what a plant-eating dinosaur was attacked by a large predator, can be rejected for two reasons. Firstly, his bones clearly there would be bite marks — this is unlikely to be the scientists became silent. Secondly, the body of a dinosaur was covered in armor and, possibly, sharp spines. This "hedgehog" hardly anyone would dare to attack.

In General, Canada is a real Depository of the remains of ancient creatures. Not long ago I wrote about a new dinosaur that was more dangerous than t-Rex from "Jurassic Park". Read to the end? Then I invite you to get acquainted with the animals . 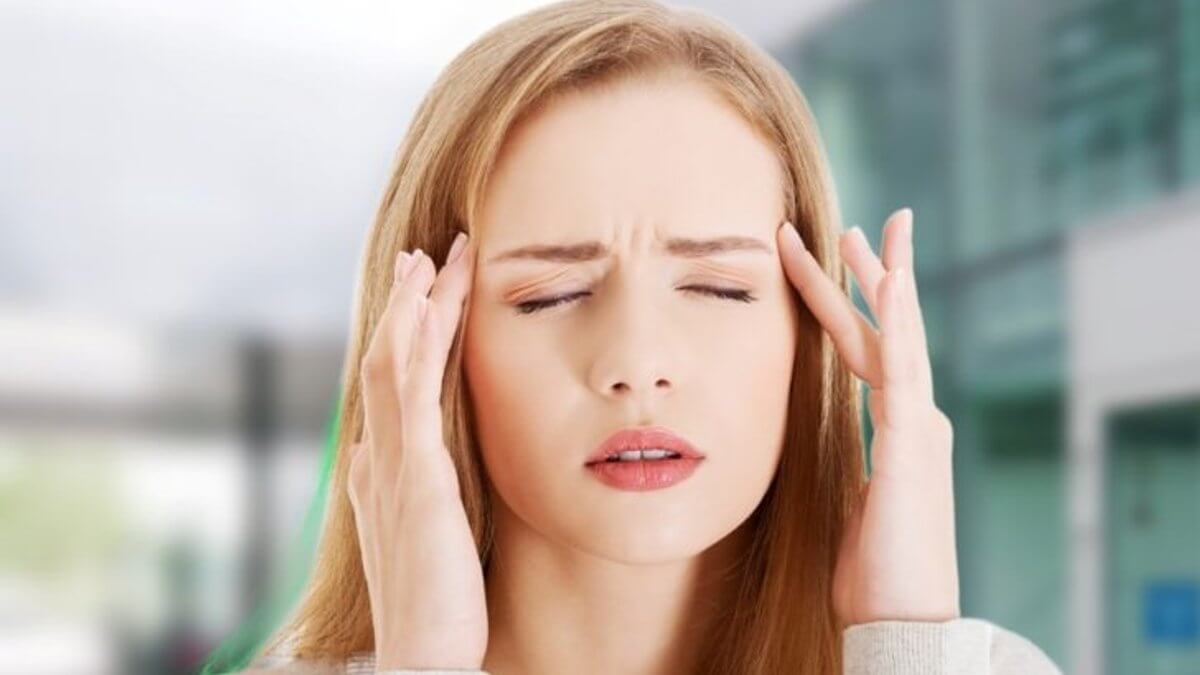 What is dangerous high blood pressure and how to decrease it? 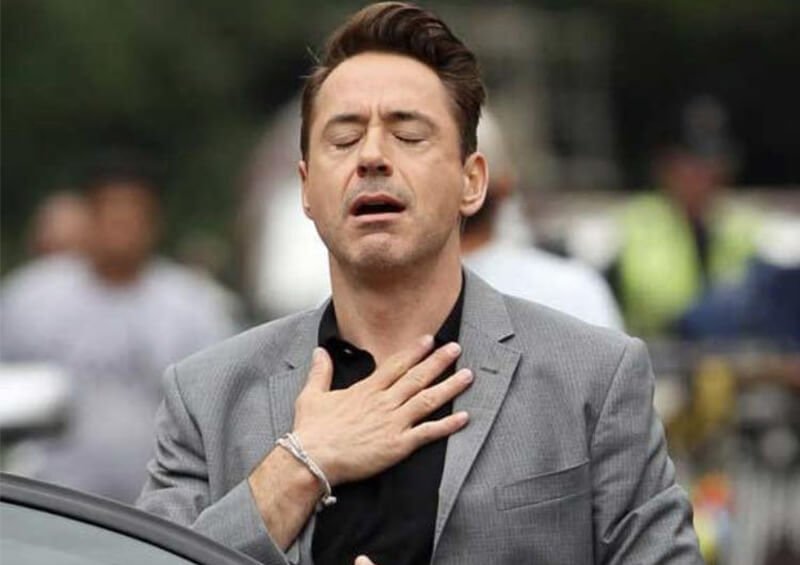 Where on Earth the cleanest air?

Clean air on our planet is, but it is far we All know about the strong pollution of urban air and from time to time go outside the city or even in Park. Relatively humid areas, in the parks and villages the air is very fresh, but ... 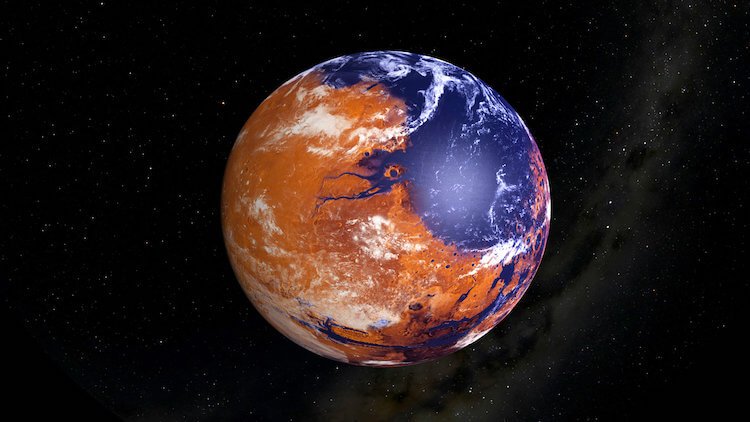 The most unusual natural phenomenon on Mars

On Mars, you can find most of the things that we did not expect to see there. Oh, that Mars! Much about him said interesting things. We watched a lot of movies about Martians, we've heard stories about how he was going to win, it ...